It’s 1943 and you are an ordinary American out to see a Hollywood flick which you have heard is all about contemporary Russia—neither the anachronistic mélange of savagery and splendor you might have seen in movies as a child, nor the more recent “happy ending” dramas tailored to the Western palate, but purportedly a record of contemporary life in the Soviet Union. Like many, you are circumspect, so when Joseph E. Davies, US Ambassador to the USSR from 1936-1938, appeals directly to your discernment as a viewer and assures you that the film to follow will present only the “hardboiled” facts, good and bad, witnessed firsthand by an unbiased observer, your hopes soar. You are both puzzled and intrigued as Davies goes on to describe the Soviet government as “misrepresented and misunderstood.” Produced and distributed by Warner Brothers, Mission to Moscow was the first pro-Soviet Hollywood film of the World War II era, soon to be followed by Samuel Goldwyn's The North Star (1943, available for loan from REEI), MGM's Song of Russia (1944, available for loan from REEI), United Artists' Three Russian Girls (1943), and Columbia's The Boy from Stalingrad (1943, available for loan from REEI) and Counter-Attack (1945). Based on Davies’ best-selling book of the same name, an account of his years in the USSR, the film enjoyed the support of FDR himself, who even met with Davies on a number of occasions to discuss its production.  As the Mission to Moscow opens, the new US ambassador to the USSR (played by Walter Huston) cuts short a family vacation to accept his “mission”—meeting with Soviet leaders to determine whose side the USSR will take in the impending war with Germany. He sweeps his wife and grown daughter off on a grand tour of the USSR that offers the film audience a strange brew. There are many cultural clichés (perhaps intended to show that some things haven’t really changed in Russia), displays of Soviet strength and innovation meant to evoke confidence in a Soviet-American alliance, and appeals to shared aspirations and ideals (sometimes self-contradictory, juxtaposing for instance Russia’s new elite culture with the low “bourgeois” morals of corrupt officials). The dramatic focus on Stalin’s purge of “traitorous” Trotskyite elements (i.e., Party figures formerly hailed as heroes of the Revolution) telescopes the Moscow Trials (1936-1938) into a single conclusive hearing whose final pronouncement of guilt is backed by a dizzying web of international intrigue. Could an average American Joe, in 1943, distinguish aspects of Davies’ narrative that were problematic or downright contrary to fact? Did Mission to Moscow earn, as Davies so solemnly promised, the respect of an audience interested in truth? What ideological players shaped its filming and production? Does its approach differ in important respects from, say, One-Story America (1937), Ilf and Petrov’s literary travelogue of the United States—an entertaining and educational reportage served up to the Soviet public with a healthy helping of state propaganda? To what extent is Mission to Moscow an echo of competing voices and values of the day? Fortunately, today we can answer these questions by watching the film and reviewing the storm of controversy that followed its release fourscore years ago.

Can having a child heal one’s trauma, one’s loneliness? How might the experience of war change the terms of love, or even alter its definition? And what is the price of hope in a society reduced to shards? These are some of the many difficult questions posed by Russian film director Kantemir Balagov in his 2019 historical drama Beanpole [Dylda], which received the Best Director Award and the FIPRESCI Prize for Best Film in the Un Certain Regard at the Cannes Film Festival and was short listed for Best International Feature Film at the 92nd Academy Awards. The film follows the tumultuous relationship between Iya (Viktoriia Miroshnichenko) and Masha (Vasilisa Perelygina), two young women who return to Leningrad from the front at the end of the Second World War. Iya, a tall thin blonde whom the hospital ward nurses call “Beanpole,” assists the chief physician in relieving the distress of maimed soldiers, sometimes with simple good cheer and sometimes, we learn, by means of illicit lethal injections. Subject to spells of trembling and immobility following a traumatic brain injury on the front, Iya accidentally suffocates Masha’s malnourished son Pashka (Timofey Glazkov) during a round of affectionate play while babysitting him. Met with silence upon her return, Masha guesses the truth; her numb reaction becomes comprehensible only as the nature of her own wartime traumas is gradually revealed. Soon, an ailing Masha decides to replace her lost child—despite all odds, and at any cost—and enlists Iya’s reluctant help. Intense moments of brilliance and light saturated with the color green (symbolizing sensations of hope and renewal) alternate with shadowy scenes tinted with red (as though all were steeped in blood and decay) to visually underscore the internal conflict that pervades the protagonists’ post-war experience. As Masha and Iya are enmeshed in strange relational triangles reflecting each woman’s broken attempt to embody her private hopes and dreams, the riddle of their relationship gains sharper focus, causing us to ponder—whether genuine intimacy is possible in the wake of incomparable loss, whether compassion can prevail over desperation, whether life can be rebuilt with someone else, or only at another’s expense. Balagov and fellow writer Aleksandr Terekhov pull no punches, offer no solutions—the film’s unyielding narrative honesty is perhaps the greatest badge of honor one can offer its intrepid heroines. 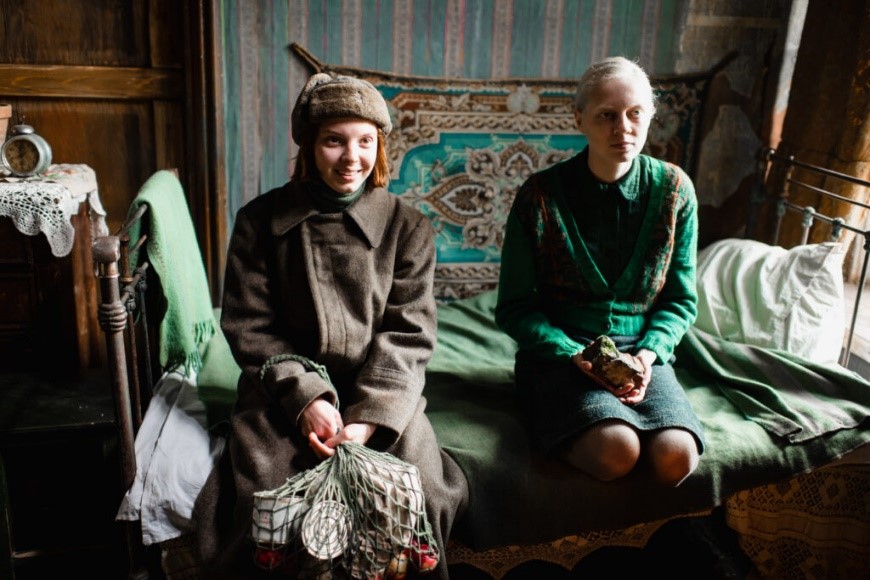 We encourage readers of REEIfication to check out Mission to Moscow, Beanpole or other of the many films for free from REEI’s ever expanding AV library (catalogs here). Email your request to our Outreach GA at reei@iu.edu).