On October 3, scholars from the fields of history, literature, art, and museum and memory studies gathered in Woodburn Hall 200 (SSRC) to engage in a symposium entitled “Surviving, Remembering, and Forgetting the Siege of Leningrad.” World War II created painful and traumatic memories for the Russian people, and in Russia to this day, the war itself (called the Great Patriotic War in Russia) continues to be the most commemorated twentieth century event. The Soviet regime’s official narrative of triumph following the war dominated for several decades, constituting a pillar of national identity. But many pages in the history of WWII were omitted or deliberately forgotten if they did not fit into the official, triumphal narrative. Recent academic publications have reopened a discussion about the Siege of Leningrad with explorations of guilt and pride, strategies of surviving and human values, and ways of commemoration and remembering. Dedicated to the memory of the late Nina Perlina, who survived the siege of Leningrad as a child (see commemorative article), the symposium unfolded in two panel discussions, both presided over by Tatiana Saburova, Lecturer in History and Academic Co-director of the Russian Language Workshop. The panel “Commemorating the Siege of Leningrad in the Library, the Museum, and the Media” included presentations by Lisa Kirschenbaum, Professor of History at West Chester University, Maria Zavalova, Chief Curator and Head of Exhibitions and Collections at the Museum of Russian Art in Minneapolis, and Angelina Davydova, an environmental journalist and Senior Lecturer at Saint Petersburg State University. The second panel, “Remembering the Siege of Leningrad in Life Writing, Poetry, and Contemporary Art,” brought together Emily Van Buskirk, Associate Professor of Slavic Literature and Director of the Russian and East European Program at Rutgers University, Polina Barskova, Associate Professor at Hampshire College and a celebrated contemporary Russian poet, and Andréa Stanislav, Associate Professor in the IU Eskenazi School of Art, Architecture and Design whose hybrid visual arts practice spans sculpture, multimedia installation, and public art. A videorecording of the symposium proceedings will be posted on the REEI website at a later date. To accompany the symposium, Veronika Trotter, Senior Collections Reference Assistant, prepared an IU Library Resource Guide (LibGuide), now available at http://guides.libraries.indiana.edu/c.php?g=920156.

On the evening of October 30, Themester continued with a screening of "Resilience: How to Live 100 Russian Years" in the IU Libraries Moving Image Archive/Screening Room. A Kickstarter-funded project, the film centers on the lives of people who were born on the territory of the Russian Empire in the tumultuous year of 1917 and survived to celebrate their hundredth birthdays. In 2017, collaborators Nadya Grebennikova, Mikhail Mordasov, and Paul Richardson traveled across vast stretches of Russia and Eastern Europe to interview 22 centenarians. The heroes of “Resilience” lived through Civil War, Collectivization, World War II, the Cold War, and the collapse of the USSR. Their lives are a living reflection of the past Russian century, and their stories show us a side of history not available in any other resource. Richardson introduced the film, reading from the companion volume Resilience: Life Stories of Centenarians Born in the Year of Revolution (Russian Information Services, 2018) and chronicling the genesis and evolution of the project. A lengthy Q and A session with Richardson followed the screening. An IU alumnus who completed an MA in Political Science and an REEI certificate in the late 1980s, Richardson is the founding editor of Russian Life, the bi-monthly non-ideological successor to the Cold War era Soviet Life. Encompassing articles on culture, history, travel, and society by a host of Russian and American contributors from academia, journalism, and other walks of life (https://www.russianlife.com/about/allauthors/), Russian Life has garnered an ever widening circle of readers through the balanced perspective, topflight writing, wide ranging coverage, and high quality illustrations that have graced more than 135 issues since 1995.

The two events continue to reverberate in a third Russia-inspired Themester project, “Remembering a Turbulent Century: Russia, 1917-2017,” a multimedia exhibit that has occupied the Wells Library Scholars Commons since October 28. Comprised of two facing walls, it features TV screens with looped programs that contain footage of interviews from "Resilience: How to Live 100 Russian Years," documentary film of Leningrad during the Siege, and contemporary artwork devoted to the Siege, including Stanislav’s current multimedia project Radio Leningrad. The exhibit also displays drawings, photographs, poetry, and scholarly works devoted to the siege as well as IU faculty book publications that address Russia in the 20th and 21st centuries. The exhibit will remain in place through December 20. 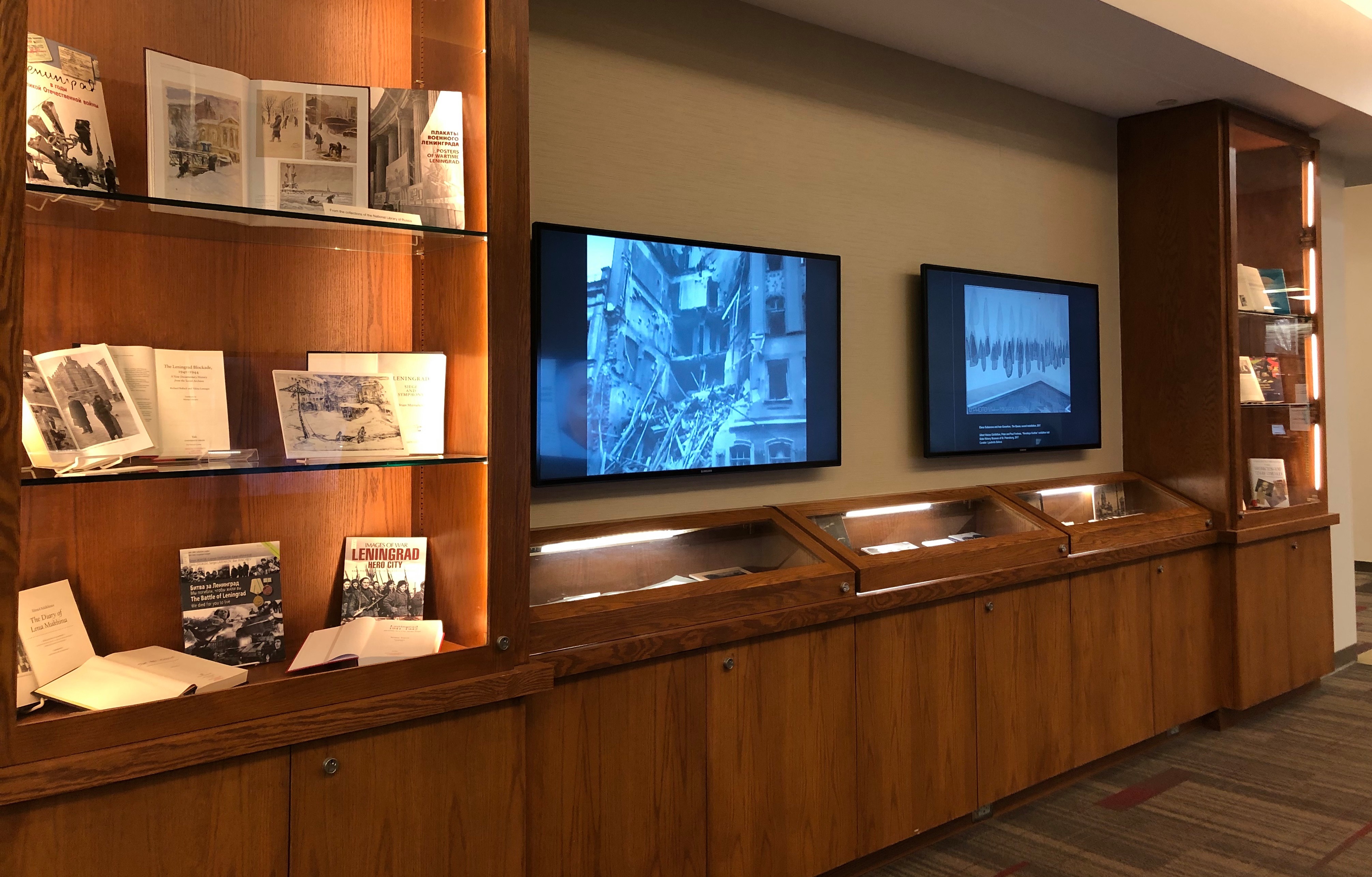 For more about some of the events that REEI and the Russian Studies Workshop have done in relation to the Themester, you can look here.