Though often neglected at IU, Armenia was very much in the spotlight at REEI over the past semester. Authoritarianism has been on the rise throughout the world and especially in many of the countries that REEI faculty and students investigate in their classes and research, but Armenia has bucked that trend through its bloodless “Velvet Revoution” in the spring of 2018, fair elections – the first in decades – at the end of the same year, and subsequent progress, albeit gradual, in the direction of greater democratization, as evidenced by improvements in a host of areas like electoral process, civil society, independent media, and corruption (see: https://freedomhouse.org/country/armenia/nations-transit/2020). In Spring 2020, REEI offered three on-campus talks that explored Armenia’s past and present as well as the country’s complicated relations with Russia.

On February 10, REEI visiting scholar Igor Kuznetsov, a world renowned anthropologist based at Kuban State University in Krasnodar (Russia), delivered a presentation in Russian on the Armenian diaspora in contemporary Russia, sharing the observations and data he has assembled over many years of field research («Армянская диаспора в современной России: Заметки из поля» [The Armenian Diaspora in Contemporary Russia: Notes from the Field]). A highly knowledgeable specialist on ethnic minorities, Kuznetsov drew particular attention to the diversity of ethnic traditions in clothing, language, architecture, and diet that distinguishes the Russian Federation’s Armenian community, contextualizing those distinctions within different patterns of Armenian migration into and across Russia. He also discussed some of the ethnic Armenians who are playing a significant role in the political and cultural life of contemporary Russian, among them the celebrated film director Karen Shahnazarov, who now serves as General Director of Mosfilm, Margarita Simonyan, editor-in-chief of Russia Today, and Guren Nazaryan, a prominent environmental and political activist.

and a leading specialist on Armenian history (as well as an alumnus of the IU Summer Workshop in Slavic, East European, and Eurasian Language or SWSEEL, where he studied Russian in 2009), for two days of public talks and meetings with students.

A Horizons of Knowledge lecture (co-sponsored by the Russian Studies Workshop, the Department of Political Science, the Department of History, the Inner Asian and Uralic National Resource Institute, and the Department of International Studies), “Of Revolutionaries and Realists: Russian-Armenian Ties Since the Revolution of May 2018,” Riegg’s first talk, provided an overview of the Velvet Revolution and the current Armenian political climate. In contrast to the “color revolutions” that have taken place in other former Soviet republics, according to Riegg, the Armenian revolution focused almost exclusively on strictly domestic issues, by and large avoiding any actions or demands that might suggest a desire for a reorientation of the country’s geopolitical orientation. Indeed, both the protestors and Nikol Pashinyan, their chosen candidate for the prime ministership, took pains to reassure Russia of their support for a continuation of Armenia’s partnership with Russia in economic and security matters. Exploring that partnership in more detail, Riegg demonstrated its overwhelming significance for both countries. Armenia is highly dependent upon Russia as a supplier of petroleum gas, wheat, and fuel for is only nuclear reactor, and thousands of Armenian citizens support their families as migrant workers in Russia. In the context of its antagonistic relations with neighbors to the west (Turkey) and east (Azerbaijan), Armenia also depends upon Russia for military support of various forms and is one of only five countries (the others being Belarus, Kazakhstan, Kyrgyzstan, and Tajikistan)  to ally with Russia in the Collective Security Treaty Organization. Russia, in turn, benefits from a close relationship with Armenia as the Caucasus region increasingly attracts the interest and influence of the EU, Iran, Turkey, and even the US and China. Ultimately, the success of Armenia’s Velvet Revolution will depend on its success in pursuing an agenda of democratic reforms while maintaining a workable and beneficial relationship with Russia, concluded Riegg. 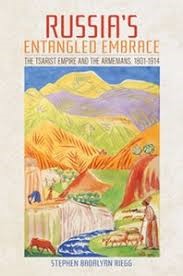 Riegg’s second talk featured a presentation of his Russia’s Tangled Embrace: The Tsarist Empire and the Armenians, 1801-1914, soon to be released by Cornell University Press (Russia's Tangled Embrace). The book draws upon extensive archival research conducted in Saint Petersburg, Moscow, and Yerevan to explore the relationship between Late Imperial Russia and the Armenian diaspora that came to play an important role in the empire’s metropolitan centers and, in the case of certain representatives, in the government of the empire as a whole. Riegg addressed major themes of the book: the Russian government’s reliance on Armenians to build its empire in the Caucasus and beyond as well as the way in which Armenians exemplified the complexities of imperial relationship in the context of diasporic distribution, inter-imperial conflict and alliance, nationalism, religious identity, and economic allegiances.