At the end of March, while our attention was turned to the distressing daily reports about the COVID-19 epidemic, sad news arrived from Poland. On March 29, 2020, Krzysztof Penderecki, one of the world’s most distinguished composers, passed away in Kraków at the age of 86. With his death, a whole era in music comes to a close.

The name of Penderecki is nearly synonymous with key concepts of European avant-garde. Today, nearly every textbook of music history includes his Threnody for the Victims of Hiroshima—a composition that pushes innovative sonoristic effects produced by string instruments to new limits, so much so that the composer has to invent an entirely new notation for his ideas. Penderecki's music has also been adapted for film soundtracks, among them The Exorcist (1973), The Shining (1980), and several of David Lynch’s films.

In 2017 Krzysztof Penderecki and his wife Elżbieta Penderecka visited IU Bloomington at the invitation of the Hamilton-Lugar School of Global Studies (HLS) for a series of momentous events organized in collaboration with the Jacobs School of Music and the Polish Studies Center. During the visit Maestro Penderecki received an honorary doctoral degree conferred by Indiana University President Michael A. McRobbie. “Krzysztof Penderecki is one of the most influential composers and performers of the past 50 years,” McRobbie said at the time. “His outstanding lifetime of achievement and remarkable talent continues to shape global musical culture and will certainly have a timeless impact.” In their letter nominating Penderecki for the honorary doctorate, Lee Feinstein, HLS Founding Dean and Professor of International Studies, and Gwyn Richards, Dean of the Jacobs School of Music and Professor of Music, wrote: as “one of the most-often-performed and significant composers of the late 20th and early 21st centuries, Penderecki has had an enormous influence on composers, performers and the musical landscape of the past 50 years.” 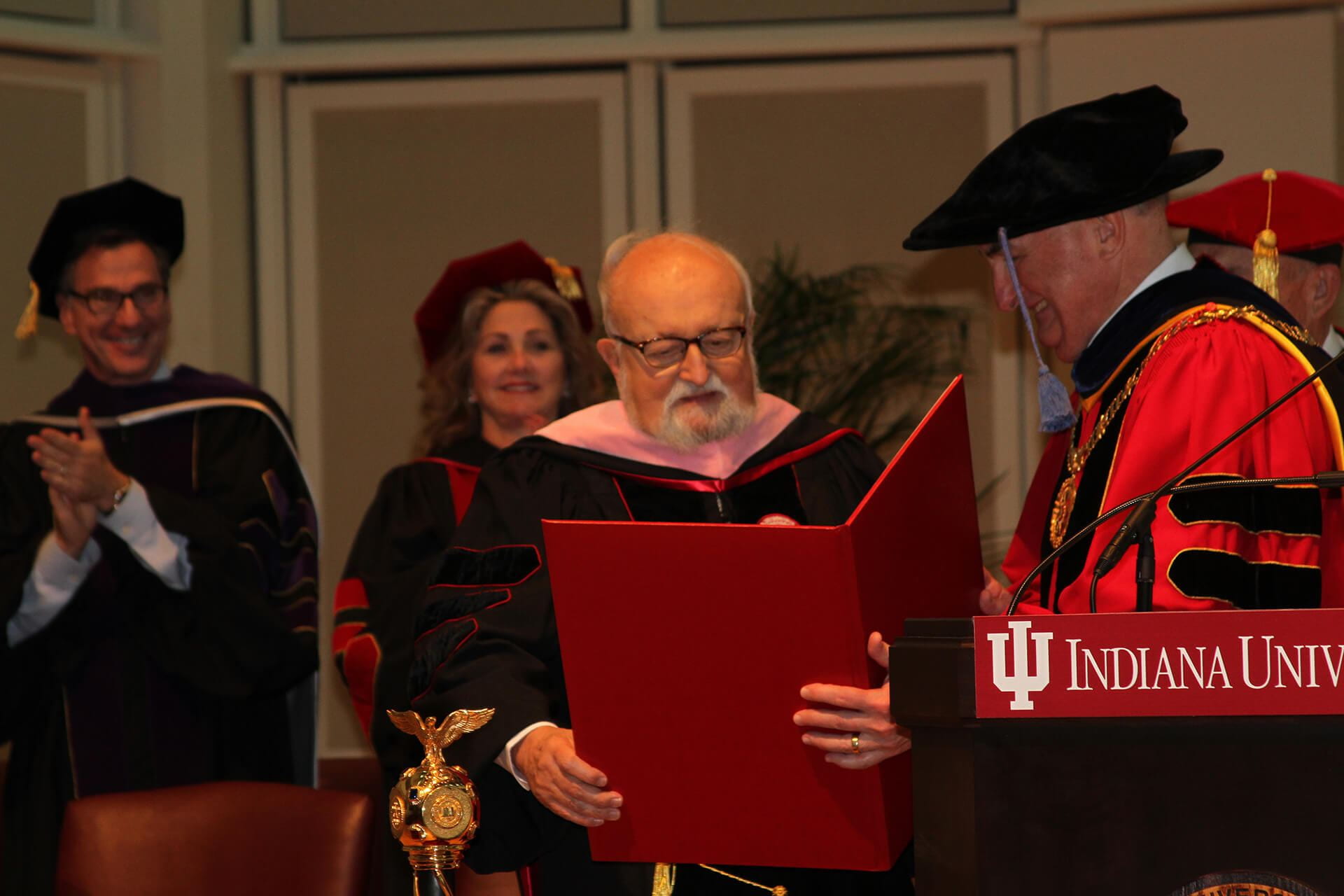 During the visit, the IU Jacobs School of Music Oratorio Chorus and Philharmonic Orchestra, under the Maestro’s guidance, performed his St. Luke Passion, hailed as one of the most important sacred works of the 20th century. Composed and premiered during a politically and aesthetically momentous era, St. Luke Passion played a role in two highly politicized events: Poland’s Millennial Celebrations (variously understood as 1,000 years since the introduction of Christianity to Poland or the birth of the Polish state) and in the post-World-War II reconciliation between Poland and Germany. The significance of the work was discussed in a symposium entitled "Politics Meets Culture: The Political and Historical Significance of Penderecki’s St. Luke Passion (1966)” and taken up by Halina Goldberg, Professor of Musicology and current Interim Director of REEI, in her conversation with Maestro Penderecki.

While the world weeps for the victims of the COVID-19 pandemic, once again we draw strength from the composer’s music and recall his words: “My art, deeply rooted in Christianity, strives to rebuild human’s metaphysical dimension that has been shattered by the cataclysms of the 20th century…. Art should be a fountain of arduous hope.”

To learn more about Penderecki and his music, listen to the podcast produced by Through the Gates at IU.