One of the most accomplished and active of REEI’s affiliate faculty, Professor Arthur Benoit (Ben) Eklof is retiring at the end of his 43rd year in the IU Department of History. At least two generations of students benefitted from Ben’s skillful and inspiring pedagogy in Russian history, which was recognized with a Trustees’ Teaching Award in 2010. A prolific scholar with numerous books and articles to his credit, Ben was a Senior Fellow at the Kennan Institute of the Woodrow Wilson Center in 1987-88 and received three Fulbright Fellowships as well as fellowships from the International Research and Exchanges Board (IREX) during his career. In the course of frequent and extended research visits to both Soviet and post-Soviet Russia, he witnessed its transition from the stagnation of the Brezhnev regime through the exhilaration and chaos of perestroika and on up to the authoritarian capitalism that has solidified under the rule of Vladimir Putin.

Like many of his generation, Ben first encountered Russia through its literature. After devouring translations of the classic works of Tolstoy and Dostoevsky as a student in high school, Ben began the study of Russian at Middlebury College, where he received his BA in 1968. While a graduate student in History at Princeton University, he conducted research in the Soviet Union as a Fulbright and IREX scholar based at Moscow State University in 1972-73, extending his stay for another two years to work as a translator at Progress Publishers and occasional freelance consultant for CBS. Over the duration of this multi-year sojourn, Ben travelled widely through the Soviet Union and cultivated acquaintances with many of its citizens, developing friendships with some that have lasted until this day. Such a prolonged exposure to Soviet life, something almost unprecedented for an American during the Cold War era, engendered in Ben a deep and nuanced understanding of Russian culture as well as an abiding love of the Russian language that have imbued the decades-long teaching and scholarship that commenced upon his return to the United States and the completion of his PhD studies in 1977. “It was anything but boring for a young American to live in Moscow, and the reality I experienced had little in common with what Western scholars were writing about ‘totalitarian’ regimes,” Ben has reflected about the experience. “Under the surface of monolithic uniformity was a fascinating society teeming with contradictions and rich in art and the life of the mind. Ever since that experience I have belonged to two worlds: Russia and the United States.” During the late-Soviet era, Ben closely observed the changes engendered by perestroika, particularly in the area of education as a consultant to the late Edward Dneprov, who became the first Minister of Education in post-Soviet Russia as well as a close friend and collaborator of Ben’s. And Ben has visited Russia even more frequently in the post-Soviet era, undertaking lengthy research trips to Moscow as well as to more provincial locales, like Kirov (Vyatka), that rarely see Americans or other foreigners.

Early in his career at IU, Ben established himself as a leading specialist in the history of Russian education. His first book publication, the classic Russian Peasant Schools: Officialdom, Village Culture and Popular Pedagogy, 1861-1914 (Berkeley, 1986) elicited a broad range of glowing reviews. Among others, Alfred J Rieber, an eminent American historian of Russia, deemed it “the definitive history of literacy and schooling among the vast majority of the Russian population between the emancipation and the outbreak of World War I” and Max Okenfus characterized it as “an original and important book” and “the fullest and most carefully researched attempt to document the spread of literacy in late imperial Russia.” Ben’s scholarship expanded to include such diverse but related areas as village life in Imperial Russia, reform movements and policies from the time of the Great Reforms to the perestroika era, and Russian populism. Subsequent books that Ben authored included Soviet Briefing:  Gorbachev and the Reform Period (Westview Press, 1990), Дружба, семья, революция; Николай Чарушин и поколение народников 1870-х годов [Friendship, family, revolution: Nikolai Charushin and the generation of the populists of the 1870s], co-authored with Tatiana Saburova, Ben’s faculty colleague in History; as well as a reworked English-language version of the latter work, also co-authored with Tatiana, A Generation of Revolutionaries: Nikolai Charushin and Populism in Russia from the Great Reforms to Perestroika (Bloomington, 2017). Ben and Tatiana’s work on Charushin also garnered numerous accolades. Sarah Badcock, a British historian of revolutionary Russia, praised its “multi-faceted treatment of Charushin and his milieu” that provides : a rich picture of the 1870's Populist movement, of their life and work in prison and Siberian exile, and the vibrant civil society that emerged in late imperial Russia” adding that the book is a good read in its own right . . . and an invaluable addition to undergraduate and graduate curricula.” And agrarian historian David Darrow described the book as “a powerful piece of scholarship that will stand for a long time” and. “demonstrates how biography can open doors to so much more than the life of a single individual.”

Ben also edited co-edited a number of major scholarly collections: The World of the Russian Peasant: Post-Emancipation Culture and Society with Stephen P Frank (Unwin Hyman, 1990); Democracy in the Russian School: The Reform Movement in Education Since 1984 with Edward Dneprov;  Russia’s Great Reforms, 1855-1881 with John Bushnell and Larisa Georgievna Zakharova (IU Press, 1994); and Educational Reform in Post-Soviet Russia : Legacies and Prospects with Larry E Holmes and Vera Kaplan. He also oversaw the English translation of Boris Mironov’s magisterial work on the social history of Imperial Russia that appeared in two volumes as A Social History of Imperial Russia, 1700-1917 (Westview Press, 1999 and 2000).

An enormously dedicated, thoughtful, and charismatic teacher, Ben guided hundreds of IU undergraduate and graduate students through the thickets of Russian history in such courses as Empire of the Tsars, the Gorbachev Revolution, Heroes and Villains in Russian History (Biography and Mythmaking), and Colloquium in Imperial Russia. “Prof. Eklof's greatest quality, I think, is his passion for engaging his students,” observes REEI MA student Griffin Edwards, a student in Colloquium in East European History in Spring 2020, when Ben taught the course for the last time. “He's never afraid to work through a tough topic with students in discussion or to encourage debate with and among them.” Ben served as chair or committee member for dozens of dissertations and REEI master’s essays. “No one has had a greater impact on my intellectual and professional development than Ben Eklof.,” recalls Colleen Moore (PhD, 2013, History), who completed her dissertation under Ben’s direction and is currently Assistant Professor at James Madison University. “He introduced me to the wonderful world of peasant studies; encouraged me to read broadly, outside the narrow confines of my dissertation topic and field of expertise; and inspired me to take a holistic approach to Russian history that includes immersing myself in the language and culture. Through his H601 course, he imparted a foundation in historical methodology, a passion for teaching, and an indelible camaraderie to an entire generation of history graduate students. His presence at IU will be sorely missed.” Ben’s reputation as a mentor extended beyond IU to the further reaches of Russia, something I had occasion to appreciate in September, 2018 when he and I represented IU at the XI Baikal International Workshop in Irkutsk and Olkhon, Russia. Throughout the weeklong series of seminars, master classes, and research presentations, young scholars from the capitals and the Russian provinces as well as France, Armenia, and Ukraine constantly sought out Ben for his counsel on their research projects, counsel that Ben cheerfully and abundantly shared both in individual discussions and in the heavily attended master class on translation that he conducted.

Alongside his schedule of research and teaching, Ben has contributed generously to the REEI community and to the community of Russianists in the US and across the world in various service activities. He has assisted REEI on an almost annual basis as a member of one or another faculty committee, reviewing admissions and fellowship applications, meeting with outside evaluators, and providing guidance for the REEI director and staff. He regularly plays an outsize role in organizing the annual Midwest History Workshop and has served as chair or discussant on countless panels at the ASEEES annual convention and other conferences (in addition to presenting his own research in such venues).

Never one to let the grass grow under his feet (despite a profound attachment to the great outdoors), Ben has conceived an ambitious program for his retirement, with plans to complete two book-length projects, both addressing the history of Russian education, and undertake with Tatiana Saburova a major archive-based research and writing project that will focus on the zemstvo, an important institution of provincial local government in late Imperial Russia. He will continue to serve as Chief Research Fellow at the Poletayev Institute for Theoretical and Historical Studies in the Humanities, a division of the Higher School of Economics in Moscow.  Of course, Ben will now have more time for visits with his daughters and grandchildren on the East Coast, prolonged stays at his dacha in Maine, and marathon cycling through the hills and hollows of Southern Indiana. But as we look forward to greeting him at many an REEI event in the future and seeing him around Bloomington as well, rather than bidding farewell, REEI offers Ben its deepest thanks for many years of outstanding service and extends its best wishes for a fruitful, scintillating, and worry-free retirement! 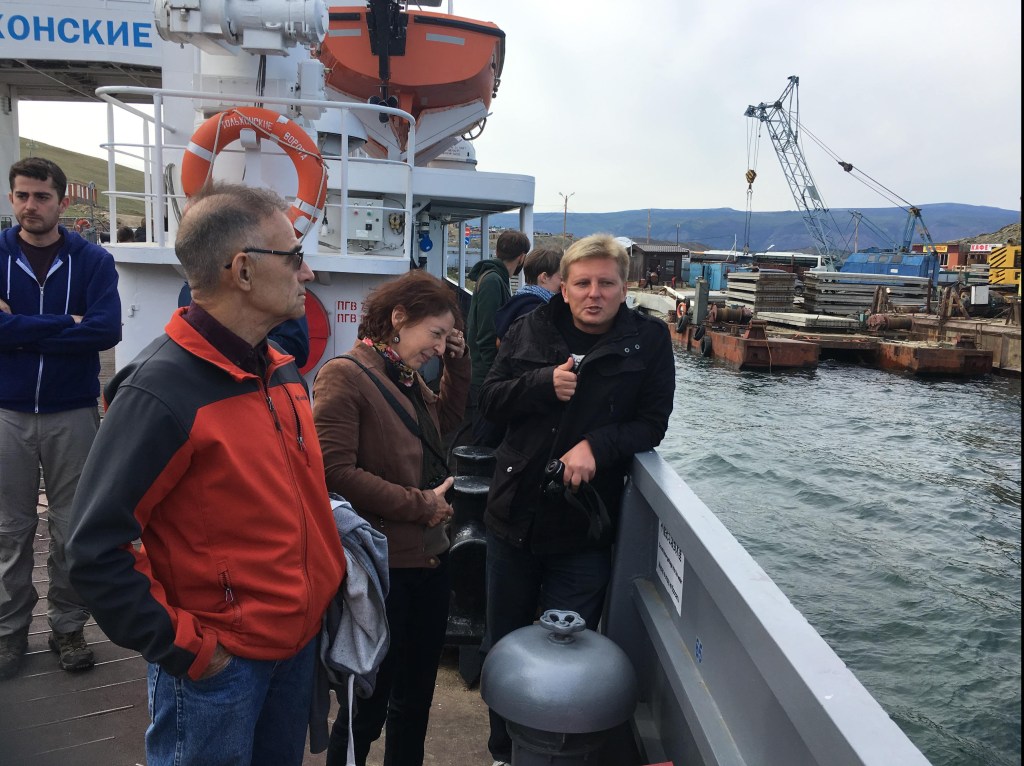