Last year, the Ukrainian Studies Organization (UkrSO) at Indiana University launched the Taras Shevchenko Conference, an international forum dedicated to the study of Ukraine in domestic and international contexts. A number of scholars and guest speakers from across the globe joined the conference, and their participation created a vibrant atmosphere for academic discussions pertaining to Ukrainian Studies.

For many, the 2020 Taras Shevchenko Conference became the last convention that they were able to attend in person. A few days after the conference was over, travel restrictions were implemented as part of preventive measures against the rapid spread of the COVID-19 pandemic. The global community held its breath following the news about the unpredictable developments occasioned by the pandemic. Academia tried to regroup quickly in order to provide students and scholars with best options for continuation of educational and academic pursuits interrupted by unforeseen circumstances. 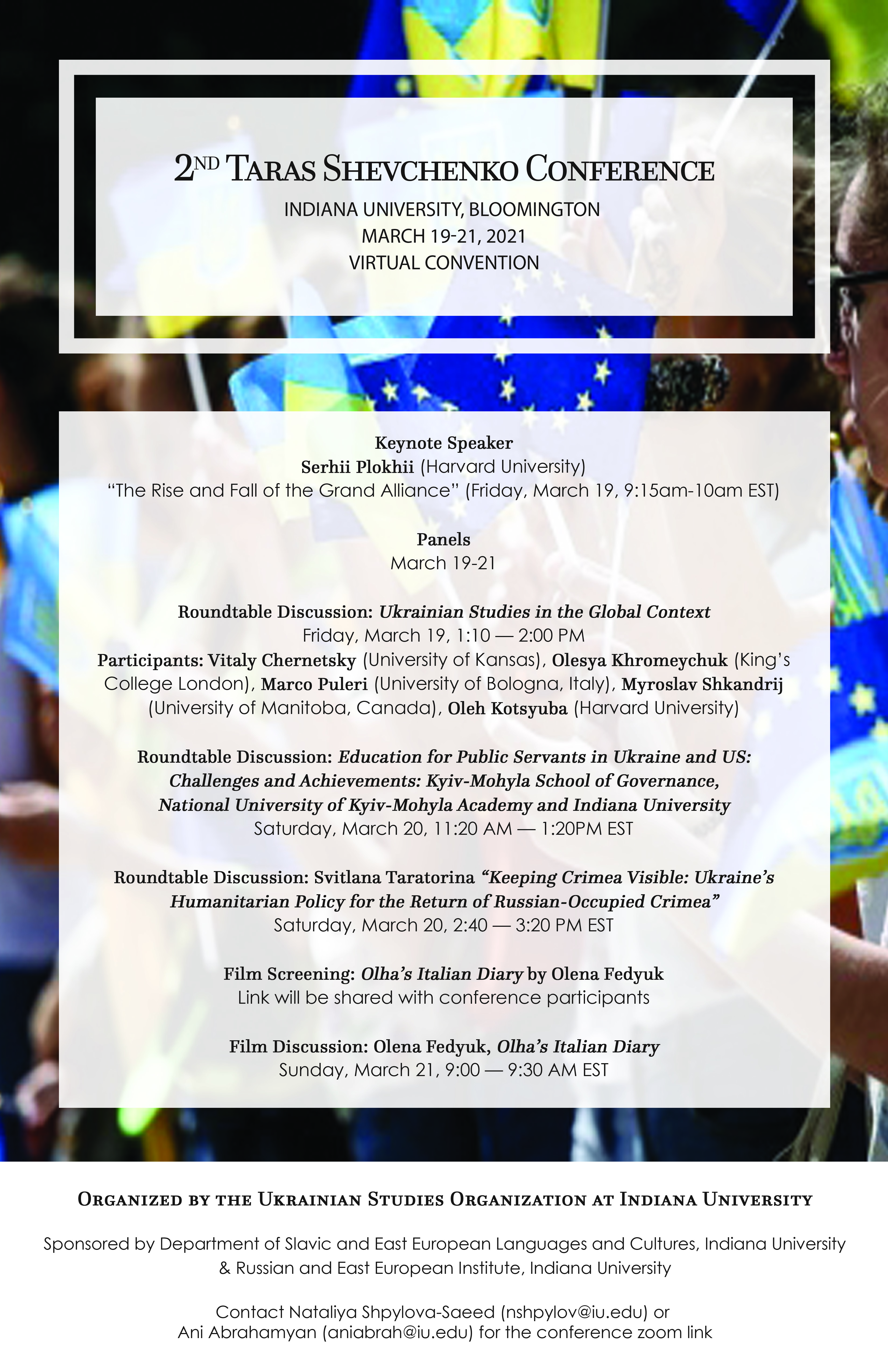 The IU Ukrainian Studies Organization became part of the new reality and normalcy that took shape under the profound influence of “going entirely online.” The Taras Shevchenko Conference of 2021 was compelled to change its format from in-person attendance to a virtual event. In spite of many uncertainties, the organizers undertook the challenge and ultimately welcomed attendees on the virtual platform of Indiana University.

This year the conference continued to offer a multidisciplinary and multidirectional exploration of Ukrainian studies. Thematically, the conference emphasized the issue of trauma, welcoming presentations on the Holodomor, the Second World War, Chornobyl, the 2014 Russo-Ukrainian military conflict, the occupation of the Donbas and Crimea, etc. The goal of the conference was to outline how new and longstanding local and international contestations can be dealt with so that these become part of the productive endeavors of national and international developments.

Hiroaki Kuromiya, professor of history at IU, opened the conference by welcoming the guests and by describing the development of Ukrainian studies initiatives at IU. The opening remarks were followed by the keynote address presented by Serhii Plokhii (Harvard University) under the title “The Rise and Fall of the Grand Alliance.” Professor Plokhii’s remarks, which he delivered in conversation with his colleague Sergei Zhuk (Ball State University), set the tone for the convention: a constructive dialogue that encourages a productive exchange of thoughts and opinions on the issues that may be sensitive, uncomfortable, painful, and yet vital and necessary for a better understanding of complicated and contested topics.

The three-day 2021 conference consisted of ten panels that focused on history, literature, education, social spheres, politics, international relations, anthropology, film, and folklore art. The virtual format opened up new opportunities and possibilities for scholars across the globe to connect with colleagues and to share their knowledge and expertise. In-person attendance has undoubtedly a number of advantages, including a possibility to participate in discussion without following the virtual etiquette of “raising hand.” Nevertheless, this year’s virtual convention was an excellent opportunity for colleagues who for many reasons would not have been able to travel to IU. Although the pandemic closed borders in some respects, it also facilitated international communication and virtual collaboration.

The 2021 conference panels were supplemented by a number of activities that included roundtable discussions, a film screening, and a conversation with a film director.

The roundtable “Ukrainian Studies in the Global Context” brought together colleagues from Canada, Italy, the US and the UK: Vitaly Chernetsky (University of Kansas), Olesya Khromeychuk (King’s College London), Marco Puleri (University of Bologna, Italy), Myroslav Shkandrij (University of Manitoba, Canada), and Oleh Kotsyuba (Harvard University). During this discussion, the participants shared their thoughts on the current status and development of Ukrainian Studies from both local and international perspectives. Interestingly, each country faces some specific challenges and has its own peculiarities in terms of how the field may develop. These peculiarities to a large degree reflect historical and cultural conditions of a specific country. One of the common challenges is opportunities for publications: making materials available to broader audiences is one of the strategies worth pursuing.

Organized by UkrSO in collaboration with the School of Governance at National University of Kyiv-Mohyla Academy (NaUKMA), a special roundtable discussion provided an opportunity to discuss in detail a joint enterprise of Indiana University and the NaUKMA. The participants discussed challenges and achievements of education for public servants in Ukraine and in the US in the following presentations: “Democratic Values and NaUKMA’s Masters Program in Communications in Democratic Governance” by Andriy Meleshevych; “Reform of Professional Training System for Public Servants: Case of Ukraine” by Volodymyr Kuprii; “Implementation of the Principles of Good Governance in the Framework of Parliamentary Reform in Ukraine” by  Pavlo Bulgak; “Education for Public Servants in Ukraine as a Key Factor of Open Government” by Tetiana Andriichuk; “Professional Education of Civil Servants as an Essential Component for Ensuring Good Governance in Ukraine” by Stanislav Hrechka; “Conflict-Sensitivity Education For Civil Servants During the Ongoing Armed Conflict” by Tetiana Kyselova; and “Strategies and Challenges” by  Russell Scott Valentino. We were saddened to find out that Andriy Meleshevych passed away just a few weeks after the conference. His contribution to educational and academic initiatives in Ukraine is hard to overestimate, especially with respect to the transformation of the National University of Kyiv-Mohyla Academy into one of Ukraine’s foremost institutions.

With REEI support, UkrSO organized a screening of Olena Fedyuk’s “Olha’s Italian Diary.” This film narrates the story of Olha, a Ukrainian woman who works in Italy as a caretaker. It touches on a number of social issues, including labor migration, relationships which develop and dissolve as the result of migration, mother-children relationships and family expectations in Ukraine, and social stigmatization. Director Fedyuk joined the convention participants for discussion. Migration, and labor migration in particular, entail a number of issues which should be explored, problematized, and openly discussed. Fedyuk specified how difficult it is to unravel a complicated story of a middle-aged woman who decides to leave her country to go abroad in order to make money for supporting her family. On the one hand, she loses something essential—her relationship with her children becomes burdened with the fact that she is not there for them all the time. Nevertheless, Olha re-discovers and re-invents herself as well: after a challenging relationship with her former husband, she realizes that she can love and can be loved again. Moreover, she is not ashamed of admitting her desire for love.

The year of 2021 marks the seventh year of Russian occupation of the Crimea. Svitlana Taratorina, a writer and a journalist and a native of the Crimea, joined the conference for a conversation titled “Keeping Crimea Visible: Ukraine’s Humanitarian Policy for the Return of Russian-Occupied Crimea.”

The virtual format truly presented the conference with additional exciting opportunities. First cautiously evaluating the possibilities of a virtual convention, the UkrSO now welcomes new opportunities discovered during this highly challenging year. Physical borders can be closed, but they should not be an obstacle for academic and creative projects.

The UkrSO appreciates the support provided by the Department of Slavic and East European Languages and Cultures, the Russian and East European Institute, and all the panelists, participants, and panel chairs who generously contributed to our initiative this year. As international communities are gradually surmounting the pandemic, we look forward to our upcoming convention in 2022, which we hope to host in Bloomington, on the IU campus.

Nataliya Shpylova-Saeed is a doctoral student in the Department of Slavic and East European Languages and Literatures.