In Spring 2021, the Robert F. Byrnes Russian and East European Institute (REEI) co-sponsored several various events with the University of Wisconsin-Madison’s Center for Russia, East Europe, and Central Asia (CREECA). This partnership between the two National Resource Centers for the Russia/Eastern Europe world region has blossomed thanks to the increasing popularity of online events. Experts affiliated with REEI or CREECA have given lectures on their areas of expertise, and together these academic units also hosted a speaker from outside their home universities. Read about the events below.

On Civilization's Edge: A Polish Borderland in the Interwar World, a lecture by Dr. Kathryn Ciancia (University of Wisconsin-Madison) - February 4th

As a resurgent Poland emerged at the end of World War I, an eclectic group of Polish border guards, state officials, military settlers, teachers, academics, urban planners, and health workers descended upon an eastern borderland province that was home to Ukrainians, Poles, and Jews. Its aim was not simply to shore up state power in a place where Poles constituted a minority, but also to launch an ambitious civilizing mission that would transform a poor Russian imperial backwater into a region that was at once modern and Polish. By tracing how these men and women recast imperial hierarchies of civilization—in which Poles themselves were often viewed as uncivilized—within the borders of their nation-state, Dr. Ciancia offered a new story of Polish nationalism that is both locally grounded and global in scope.

Kathryn Ciancia is Associate Professor of History at the University of Wisconsin-Madison. Her first book, On Civilization’s Edge: A Polish Borderland in the Interwar World, has just been published by Oxford University Press. She is now at work on a new book about the role of Poland’s global consular network in policing the boundaries of citizenship between the end of World War I and the beginning of the Cold War. 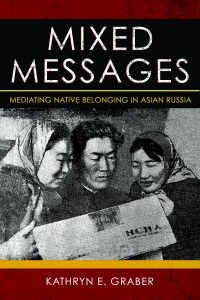 This book talk focused on language and media in eastern Siberia through Dr. Graber’s ethnography of the Russian Federation’s Buryat territories, a multilingual and multiethnic region on the Mongolian border with a complex relationship to both Europe and Asia. Her book, Mixed Messages, engages debates about the role of minority media in society, alternative visions of modernity, and the impact of media on everyday language use. The book demonstrates that language and the production, circulation, and consumption of media are practices by which residents of the region perform and negotiate competing possible identities.

Kathryn Graber is Associate Professor of Anthropology and Central Eurasian Studies at Indiana University Bloomington. A linguistic and sociocultural anthropologist, she researches minority language politics, multilingualism, mass media, materiality, and intellectual property in Russia and Mongolia. She is the author of Mixed Messages: Mediating Native Belonging in Asian Russia and co-editor of Storytelling as Narrative Practice: Ethnographic Approaches to the Tales We Tell.

Anna Komarova directs the Galina Zaitseva Centre for Deaf Studies and Bilingual Education in Moscow and serves as Associate Professor at the Moscow State Linguistic University. She is one of Russia’s foremost specialists in deaf education.

Clare Angeroth Franks (MA, REEI, 2019) has served as REEI Curriculum Coordinator since the fall of 2019.