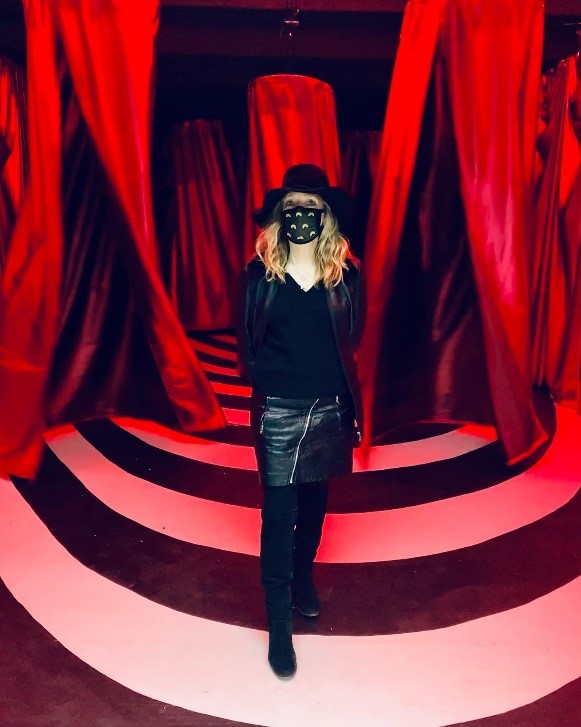 In early March 2020, REEI-affiliated Associate Professor Andréa Stanislav thought she would be an artist-in-residence at the contemporary art museum Mattress Factory later in the year, spending her time capturing film and images of the Pennsylvania landscape. However, by mid-March, Stanislav’s plans had unraveled due to the pandemic. She decided to stay in Pittsburgh and begin her residency at the museum early as other museums, businesses, and public life shut down. Her time in Pittsburgh inspired new ideas, which has become the 2021 exhibit at Mattress Factory “Surmatants- Mars Rising.” Influenced by the city’s East European immigrant and labor history, as well as elements from Russian cosmism, Stanislav’s exhibit breathes new life into the danse macabre to transcend past, current, and future plagues and pandemics.

To view a walkthrough of the installation, click here. To listen to Stanislav talk about the work in her own words, click here. Stanislav was also featured in a recent article by National Geographic on the closing of museums throughout the US due to the pandemic.

The Slavic connection in Pittsburgh

Deciding to stay in Pittsburgh until the end of the pandemic, Stanislav explored the city’s Slavic connection. She was encouraged by friends and Mattress Factory staff to visit the Czechoslovak Nationality Room, which is part of the University of Pittsburgh’s Cathedral of Learning, take in the architecture of the city’s Czech and Polish churches, and go on walks throughout the city. As she dug into Pittsburgh’s past, more and more connections stood out to her. For example, in 1918, members of the Czech and Slovak expatriate communities came together in the city of Pittsburgh to sign the Pittsburgh Agreement, which declared their intention to create a new nation in Europe. One of the authors and signatories, Tomáš Garrigue Masaryk, became the first president of the newly formed nation, Czechoslovakia.

The spark for Surmatants- Mars Rising

“This project was really activated by Facebook in a funny way,” laughed Stanislav when asked about the project’s beginnings. In May 2020, a memory of her visit a year earlier to the St. Nicholas Church in Tallinn, Estonia surfaced on her Facebook feed. The church houses the work Dance of Death or Surmatants attributed to artist Bernt Notke and one of the few medieval paintings on canvas of the danse macabre genre. While the genre isn’t one she normally gravitates towards, the work captivated Stanislav. She ended up taking hundreds of photographs of the work on her digital camera until the museum closed for the day. During that same summer trip to Europe, Stanislav picked up a book on the history of the bubonic plague as her seasonal beach read. Seeing the photos from the visit, Stanislav was reminded of the universalizing force of death depicted in Dance of Death. While she doesn’t often create art in reaction to current events, a modern danse macabre using video became the cornerstone of her piece Surmatants- Mars Rising.

Before the pandemic, Stanislav planned to record folk dancing in her grandfather’s hometown of Strážnice in the Czech Republic over the summer of 2020 as a personal project. As the pandemic progressed, however, Stanislav accepted that international travel would not be an option. Instead, she decided to incorporate contemporary dance into the piece she would work on for her residency at Mattress Factory.

While exploring Pittsburgh’s Slavic heritage, Stanislav came across the Tamburitzans, a folk ensemble which has its roots in South and East European music. Stanislav met with the Tamburitzans staff, who allowed her to dig through their archives. Stanislav uncovered the group’s rich history through their collection of handmade costumes, instruments, and other artifacts. As her communications with staff continued, she decided she wanted to partner with the ensemble and make Slavic dance the centerpiece of her installation.

Stanislav has incorporated tenets of Russian cosmism in several of her works. Surmatants- Mars Rising, however, is a special case. The installation’s video centerpiece begins with the Tamburitzan dancers dressed in Slavic traditional costume coming together. As the frames progress, the dance becomes faster and faster. The dancers don skeleton masks and double masks, echoing the danse macabre. Eventually, the dancers fall to the ground, and a white horse appears. One of the dancers, a woman in dark dress, rides off on the horse, calling to the Russian cosmist vision of resuscitation of the dead.

Following the dance, the video transitions to scenes of Mars. Footage and imagery taken by NASA’s space rover, Perseverance, became available days before the opening of the installation. Stanislav and her team rushed to incorporate the imagery of the red planet into the installation’s video centerpiece. The Russian cosmist themes of resurrection and space travel close the video. Museum guests physically ascend as they move from room to room of the installation through the assistance of ramps.

Stanislav knew she wanted the dance shown in her installation to incorporate elements from various Slavic dances. Renowned choreographer Željko Jergan joined the project and worked with the Tamburitzans to realize Stanislav’s vision. While the group normally uses folk music and traditional dance steps, composer Jesse Gelaznik crafted modern tracks for the Tamburitzans and other pieces of Stanislav’s installation. The folk ensemble met in small groups to rehearse throughout the end of the summer, but entire group rehearsals were rare. After several cancellations due to poor weather and outbreaks of coronavirus, the date was set for a November video shoot of the music and choreography performed by the Tamburitzans.

Due to the risk of coronavirus infections, indoor venues were off-limits for the shoot. Stanislav opted to film outside on the grounds of the Carrie Blast Furnaces. Although she did not know it when she chose the site, many of the dancers’ ancestors had worked at the blast furnace, and some had relatives who were part of the deadly 1892 Homestead Strike over low wages, long hours, and dangerous working conditions. When everyone arrived on set, Stanislav was pulled aside by Tamburitzans staff and told about the dancers’ personal connection to the ground they would be performing on. “They are celebrating their ancestors’ life here by this dance,” they said. That background gave the video shoot a rich depth Stanislav had not expected. The video shoot was the Tamburitzans’ only performance in 2020.

Surmatants- Mars Rising has made a big splash, garnering much interest from Czech and Slovak cultural associations and ambassadors. Jan Woska, Cultural Attaché from the Czech Republic; Robin Zoufalik, Honorary Consul of the Czech Republic for Western Pennsylvania and Ohio; artist Tom Kotík; and local Sokol President Joe Bielecki visited the installation at the Mattress Factory on June 8th, calling the exhibit “exceptional.” A fall festival of events around the work is forthcoming in October, including the show’s official in-person opening, with the participation of the Tamburitzans, the University of Pittsburgh’s Czechoslovak Nationality Room Committee, and the Czechoslovak School of Pittsburgh.

Clare Angeroth Franks (MA, REEI, 2019) has served as REEI Curriculum Coordinator since the fall of 2019.