Dietmar Friesenegger Speaks on a Historic Cantata and its Political Background

On March 31, 2021, Dr. Dietmar Friesenegger (University of Vienna and University of Iași), pictured on the right, presented “Regional Identity, Conflict, and the Nation State: The Four Lives of a Borderland Cantata Confirmation” in online format. Organized by REEI, the event benefitted from co-sponsorship by the Musicology Department, the Institute for European Studies, and the Borne Jewish Studies Program.

Dr. Friesenegger provided a history of four performances—in 1889, 1920, 1927, and 2018—of Eusebius Mandyczewski’s cantata Im Buchenland [In the Country of Beech Trees], all of which took place in Czernowitz. As state boundaries shifted during the course of the twentieth century, Czernowitz, an ethnically and religiously diverse city, was successively within borders of the Austro-Hungarian empire, Romania, Germany, the Soviet Union, and presently, Ukraine. Although the cantata never left the city, it was adapted to serve the imperial, national, and local interests of the various states that claimed it over the last century and a half. 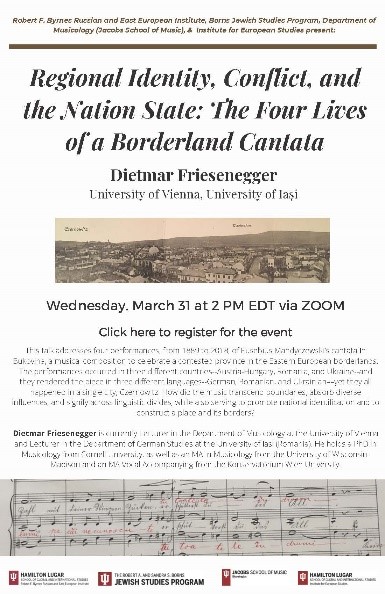 Im Buchenland— a musical setting of an allegorical play that conveys regional and folk expressions of Bukovinian identity—is linked to the genre of political cantata, inextricably tied to European nationalistic movements of the nineteenth century. The cantata, whose lyricism and vocal ensemble generated widespread appeal, functioned as an agent of political mobilization during the 1889 premiere. Although Mandyczewski remained loyal to the Austro-Hungarian empire, subsequent changes were made to the cantata to suit subsequent regimes. Dr. Friesenegger demonstrated how alterations to specific lyrics containing culturally-specific references as well as the language of the libretto constituted a balancing act of national leanings.

The cantata’s most recent performance in 2018 simultaneously highlighted religious and political divides in the city while resisting contemporary political contexts by creating unity in a shared past of former Bukovina. Dr. Friesenegger discussed the significance of certain adjustments made to the 2018 performance: the substitution of the original German in the concluding section—a national dedication in the form of a musical prayer to the homeland—with a Ukrainian translation. In light of the ongoing Russo-Ukrainian War, the resulting bilingual version was understood by some as a nationalistic Ukrainian gesture and as a homecoming of sorts for Mandyczewski, represented by the finale’s return to his native tongue.