Steven Franks came to IU for the 1987–88 academic year and has served 33 years in a 50/50 joint appointment shared by the Department of Linguistics and the Department of Slavic and East European Languages and Cultures (originally the Department of Slavic Languages and Literatures). His hiring was remarkably serendipitous: both departments started searches in 1986–87 for junior tenure-track faculty members, but the College cancelled both searches after they were underway. Franks had applied for both positions, and was at the top of the pile in both departments. So the two chairs got together and pitched a joint appointment to the College, which wisely agreed. It was the perfect fit for Steven Franks, whose education (1977 AB, Princeton; 1979 MA, UCLA; 1985 PhD, Cornell) combined both syntactic theory and traditional Slavic linguistics.

Over the years Franks has maintained a vivid double presence, taking on a full slate of service responsibilities simultaneously in both departments. This is perhaps not the best strategy for a new assistant professor, but he made it work by dint of his extraordinary work ethic and drive to achieve in both research and collegiality. He served two terms as chair of each department, first in Linguistics (1998–2004) and later in Slavic (2008–2012), and while he lamented the reduction in his research productivity during those periods, I note that that his c.v. lists twenty-two articles and book chapters published during his six years as Linguistics chair, along with two co-authored monographs and three co-edited volumes. We should all be so productive even without the administrative load! As someone who has worked with Franks on a variety of joint projects myself, I can attest that he does not delegate the lion’s share of the work on any project to his collaborators. Both departments prospered during his stewardship, and in each case he stepped down having left a major positive imprint on their programs.

As a research linguist, his major impact lay in his pioneering work on applying the most rigorous general theoretical theories and frameworks to Slavic language data. When he began his career, Slavic linguistics in the U.S. was dominated by people trained in Slavic departments (which flourished during the Cold War, when their languages were of considerable strategic importance to the country, and resources were disproportionately allocated to these programs). Today, his scholarly model — theory applied to data, with very impressive results both in terms of insights into data and systems, but also into enhancements of the theory — has become the norm in our field, and most Slavic linguistics research is done within departments of linguistics. His first monograph (Parameters of Slavic Morphosyntax, Oxford University Press, 1995) advanced the brilliant and innovative idea that in comparative study of grammatical phenomena across the spectrum of Slavic languages, it is valuable to start out by assuming that their grammatical structures are fundamentally the same, and then identify seemingly small variables (called “parameters” in that book) which differ from one Slavic language to another, which then send out tendrils throughout the grammatical system and trigger multiple cascading differences in surface form. This approach has survived twenty-five years of subsequent theoretical progress in generative syntactic theory and is taken for granted today; but the underlying insight really belonged to Franks. 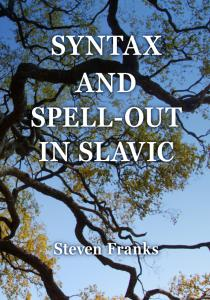 On top of everything else, he has had a huge impact on the field of Slavic linguistics and how it is practiced in the U.S. His focus on the importance of linguistic theory, which has become dominant in the field, is exemplified by the series of conference and proceedings volumes under the rubric “Formal Approaches to Slavic Linguistics”, now in its 29th year. Franks has co-edited no fewer than seven of these volumes, and has organized the conference three times in Indiana over the years. I cannot count how many times he has been an invited plenary speaker at these conferences (or at the European spinoff series of annual conferences and volumes called “Formal Description of the Slavic Languages”). In 1992 Franks and I founded the Journal of Slavic Linguistics, which has become the leading U.S. academic journal in this field. Franks then served as editor or co-editor for 23 of the subsequent 25 years (with one two-year stint as associate editor along the way), finally stepping down at the end of 2017. Few such productive scholars stick with this kind of thankless and under-rewarded activity for so long, but it is a sign of Franks’s enduring commitment to the field. While serving as vice-president of the American Association of Teachers of Slavic and East European Languages, he perceived that Slavic linguists had become less and less 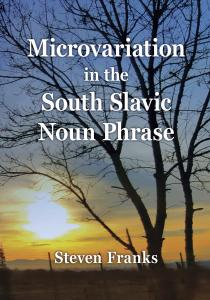 involved with this society due to the changing nature of Slavic linguistics. His reaction? He proceeded to found the Slavic Linguistic Society, devoted to bringing together linguists of all countries and all theoretical persuasions, without the language-teaching orientation of AATSEEL. This association now holds an annual conference alternating between North America and the rest of the world. Franks organized the first annual meeting here at IU in 2006, and we celebrated his retirement (slightly in advance, as it turned out) by holding the 15th annual meeting here once again in September, 2020 (the pandemic forced it to become a virtual meeting, but it was still a fine event, with a tremendous proportion of international participants.

Franks crowned his research career with a pair of linked monographs, both published by Slavica Publishers: Syntax and Spell-Out in Slavic (2017; https://slavica.indiana.edu/bookListings/linguistics/Syntax_and_Spell-Out_in_Slavic) and Microvariation in the South Slavic Noun Phrase (2021; https://slavica.indiana.edu/bookListings/linguistics/Microvariation_in_south_slavic_noun_phrase). The first of these books (originally conceived to be a single work, but then the project outgrew that option) sets out the theoretical underpinnings of Franks’s latest work, and then the second demonstrates how the theory works on one of the most complex areas of Slavic grammar. In retirement he is certain to remain active in linguistic research and in the activities of the linguistic and Slavic communities at IU. We wish him “Многая лета”!