Often summoned as a useful comparison when describing the size of contemporary Hungary, the state of Indiana also welcomed sizable cohorts of Hungarian immigrants in the late nineteenth and early twentieth centuries, especially in South Bend and Terre Haute, and, of course, provides a home to the country’s leading program in Hungarian Studies here in Bloomington. But perhaps the most celebrated Hungarian engagement with the Hoosier State took place in 1852, when Lajos Kossuth, leader of the failed Hungarian Revolution of 1848-49, visited Indiana during a tour of the United States.

News of the Hungarian Revolution elicited a torrent of sympathy on the part of Americans, who favorably compared the Hungarian revolt against Austrian imperial rule with their own war of independence from England less than a century before. With the bipartisan support of the US Congress, Kossuth departed his site of refuge in the Ottoman Empire on board the USS Mississippi, which brought him to England, where he spent a few weeks before setting sail for New York as a passenger on the US steamboat Humboldt.

Kossuth came to the US with the purpose of winning American governmental and popular support for the cause of Hungarian national liberation. His reception, at least in the first couple months of the visit, was a triumphant one by most accounts. Crowds numbering in the tens of thousands assembled to greet him upon his arrival in New York in early December, 1851. Lavishly feted by the city’s private citizens and government officials, Kossuth received donations of both money and munitions during the following weeks. New Yorkers adopted the Hungarian revolutionary’s occasionally flamboyant manner of dress and restaurants began to offer Hungarian cuisine, as reported in The Sun:

. . . [I]mmediately previous to the Christmas of 1851 New York city underwent a period of Kossuth mania, and it affected the holiday presents. Every New Year's gift associated itself in some designation with Kossuth and Hungary. Restaurants abounded with Hungarian goulash, a savory dish of boiled beef and vegetables, strongly infused with red peppers; and there were Kossuth cravats (formidable bands of satin or silk wound around the neck, with ends liberally folded over the shirt front), Kossuth pipes, Kossuth umbrellas, Kossuth belts and buckles, Kossuth purses, Kossuth jackets, and Kossuth braid and tassels for wearing apparel.

From New York, Kossuth travelled to Washington, briefly visiting Philadelphia and Baltimore on the way. While in the capital, he attended a Congressional Banquet in his honor and dined with President Millard Fillmore at the White House. Following the two-week visit to Washington, Kossuth headed west to meet with a wildly enthusiastic reception in Harrisburg, Pittsburgh, Cleveland, Columbus (OH), Cincinnati, and smaller settlements. As in New York and Washington, Kossuth addressed government assemblies and delivered speeches before the general public as well as for audiences that had purchased tickets to hear him. Throughout his travels, Kossuth continued to collect monetary support for the Hungarian cause in the form of donations, the issue of special bonds, and the sale of tickets to his speeches.

Inspired by the so-called “Kossuth craze” that had broken out further east, Hoosiers understandably wanted to get in on the action. Two weeks after Kossuth’s arrival in New York, the Indiana Legislature formally invited him to visit the state. Governor Joseph A. Wright included the invitation with a letter addressed to Kossuth, “the representative of freedom of the Old World." In January, 1852, while Kossuth was still on the East Coast, the Daily Indiana State Journal ran some drama in verse that featured the following passage:

Enter husband, with one of the new Kossuth hats on--gun and newspaper--spouting Kossuth's latest speech. Enter wife with a broom.

Wife (angrily):
Why will you wear that horrid hat?
It looks too bad to mention;
And flourish round that rusty gun
And talk of intervention?

Husband (meekly):
Betsy, my dear, don't worry so;
Control your rising passion.
Why sport that gun and new chapeau?
Kossuthing ('cos-shooting') is the fashion!

In preparation for the impending visit, Governor Wright appointed a committee of 50 assemblymen and private citizens to coordinate publicity and arrange for Kossuth’s entertainment in Indianapolis. The invitation accepted, the state sent ten members of each house in addition to the Lieutenant Governor to meet Kossuth in Cincinnati and escort him to the state capital.

Kossuth, his entourage, and the Indiana delegation departed Cincinnati aboard the packet Wisconsin on February 26, 1851. Frederick Trautmann, emeritus professor of Temple University, has provided this description of Kossuth’s passage into Indiana:

When [the Wisconsin] passed Lawrenceburg and Aurora, Hoosiers lining the riverbank applauded her passenger. At Rising Sun and Patriot they fired volleys of cannon shots. A hundred Kentuckians shouted their good will at Carollton, even though Kossuth did not appear on deck. In late afternoon the Wisconsin docked at Madison. There several thousand Hoosiers cheered and waved banners, handkerchiefs, and hats. On each end of the wharf a field piece roared, and artillery on the Wisconsin answered. The German Brass and Washington bands played ‘loud bursts’ of ‘stirring and patriotic airs.’ From the hurricane deck Lieutenant Governor Lane introduced Kossuth, who bowed and waved to his assembled hosts.

After spending the night in Madison, where he delivered a short speech to the crowd assembled outside of his lodgings at the Madison House, Kossuth and his party by train for Indianapolis on a route that took them through Dupont, Wirt, Vernon, Elizabethtown, Columbus, Edinburgh, Whiteland, Greenwood, and Southport, where the Kossuth Special, as the train had been named, drew cheering crowds at every stop along the way.

Upon arrival in Indianapolis, Kossuth was escorted through the city in a long procession that included a brass band, a civil militia, a fire brigade, members of a German-American fraternal organization, dignitaries and officials in carriages, and individual members of the public on foot. When the procession came to a halt at the State House, Kossuth addressed the thousands that had gathered. Contrasting the freedom and harmony of the New World with the despotism that prevailed in Europe, Kossuth warned his audience of the threat that Europe represented to American’s democratic aspirations and urged them to support a policy of non-interference in Hungary. That evening, Governor Wright hosted Kossuth as guest of honor at a reception, an affair that drew thousands and recalled the raucous festivities at President Andrew Jackson’s inauguration in 1829. Over the next two days, Kossuth visited both houses of the Indiana Legislature and continued to beseech support for Hungarian independence in speeches delivered to a group of printers, who presented him with a monetary donation, and the Association of Friends of Hungary, an organization recently formed by Governor Wright at Kossuth’s behest. On March 2, Kossuth returned to Madison by train and then crossed the river to Louisville, Kentucky.

Following his stay in Louisville, Kossuth sailed to Saint Louis and subsequently travelled through the South before wrapping up his American tour with visits to New Jersey, Massachusetts, and upstate New York. In July, 1852, he departed the United States on a boat that sailed from Jersey City, New Jersey to Great Britain.

Despite a remarkably favorable reception at its outset, Kossuth’s tour of the United States was ultimately a failure. He succeeded in raising only a fraction of the funds that he had hoped for. in part because he managed to alienate important segments of American society, including Roman Catholics (Kossuth was scathing in his criticism of the Church, which he regarded as a bulwark of the Habsburg monarchy) and abolitionists (Kossuth refused to condemn slavery lest he alienate potential supporters in the South, a policy that failed to pay off as he met with a cold and sometimes even hostile reception there). For other Americans, the Kossuth craze was just that—a short-lived fad that soon gave way to other distractions. 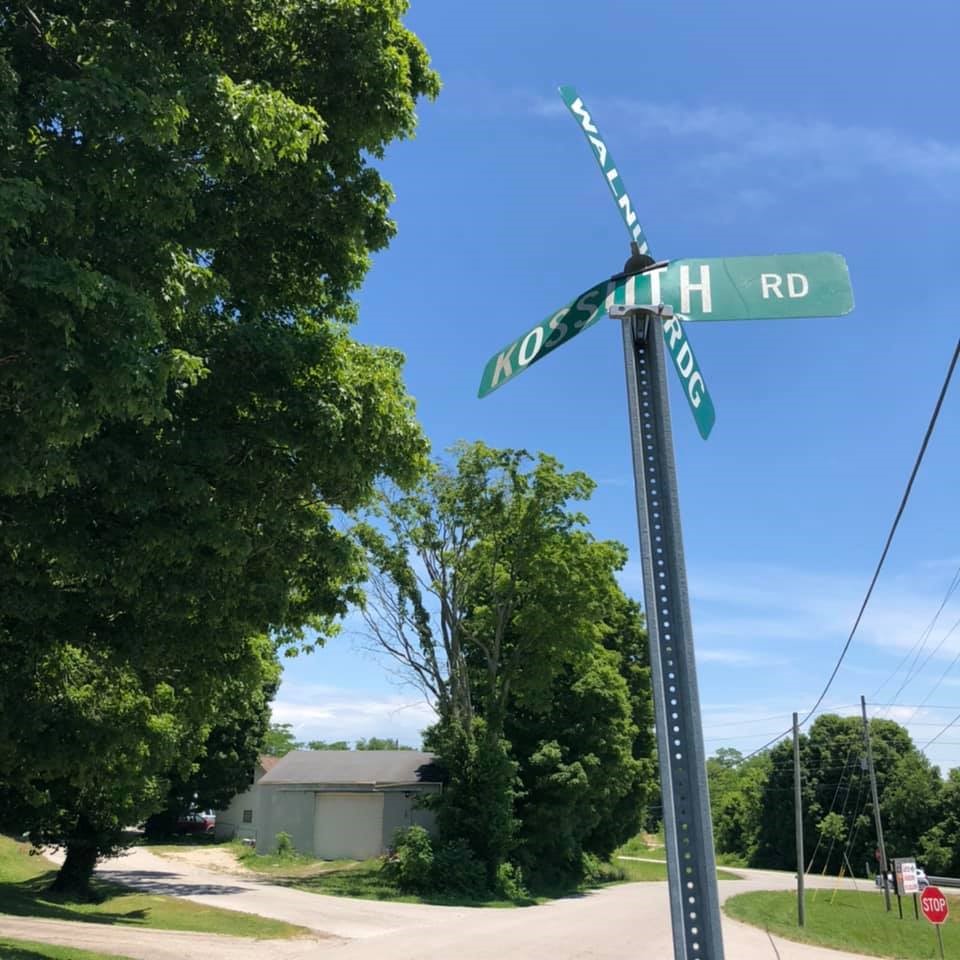 The modest Kossuth heritage includes a street in Lafayette named in his honor as well as “an unincorporated community in Monroe Township, Washington County” (Wikipedia) that bears the name of the Hungarian eminence who stirred thousands of Hoosier hearts some 169 years ago.

Kossuth, IN in June 2020 (photo by Veronika Trotter)

Sources used for this article include “Kossuth in Indiana” by Frederick Trautmann (Indiana Magazine of History, December 1967, Vol. 63, No. 4 and accessible at https://www.jstor.org/stable/27789451) and “Louis Kossuth in America, 1851-1851” (Master’s Thesis of John Bartholomew St. Leger, submitted to the University of Richmond in 1961 and accessible at: https://scholarship.richmond.edu/cgi/viewcontent.cgi?article=1998&context=masters-theses).