On March 22-23, 2019, the Romanian Studies Organization (RomSO) and the Hungarian Cultural Association (HCA) at Indiana University joined forces to present the Romanian Studies and Hungarian Studies Junior Scholar Conference, bringing together graduate students, faculty, and scholars representing a wide range of disciplines and geographic concentrations. On Friday, March 22, the conference opened with a panel entitled “Nationalism and Nation Building: Institutions, Education, and Historical Narrative,” was chaired by Dr. Maria Bucur, John W. Hill Chair in East European History and Professor in the Departments of History and Gender Studies at IU Bloomington and highlighted both historical and contemporary examples of nationalism in Romania and Hungary. The second panel, in which presenters spoke on issues of foreign policy as well as private humanitarian efforts in Cold War-era Hungary, was chaired by Dr. Jeffrey Isaac, James H. Rudy Chair in Political Science and Professor in the Department of Political Science at Indiana. 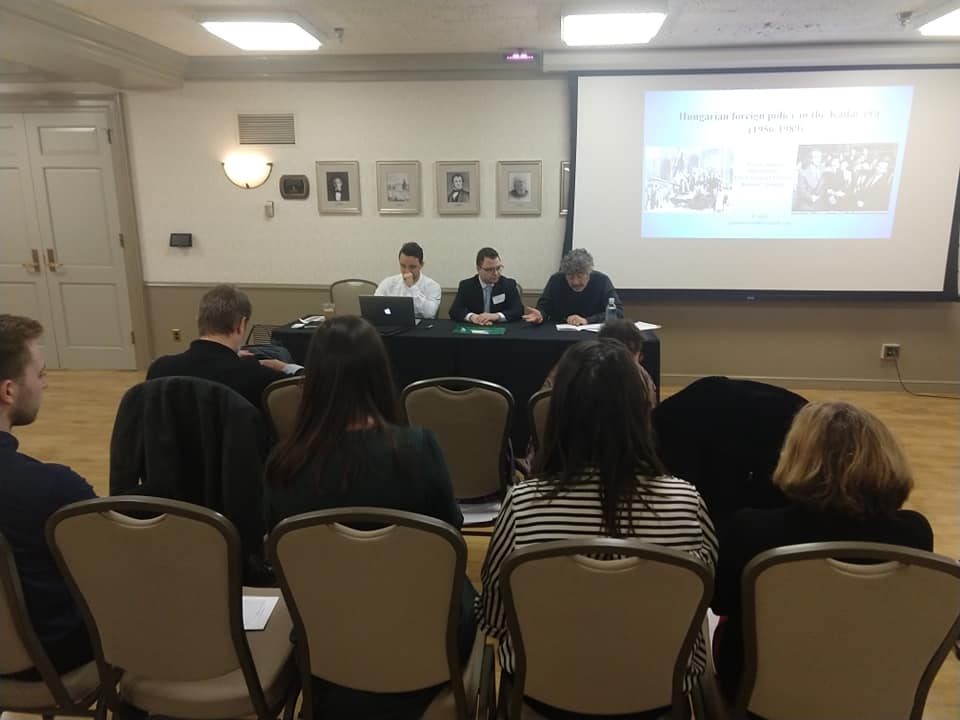 The second day of the conference opened with a panel entitled “Entangled Histories: Hungary & Romania,” in which presenters highlighted the experiences of two minority groups in Romania, the Székelys and the Moldavian Csangos. Keynote speaker Dr. Constantin Iordachi, Professor of History at Central European University, offered comments. The fourth panel, chaired by Associate Professor of History R. Chris Davis of Lone Star College, focused on issues of gender, domestic space, and material consumption in late communist and post-communism Romania. The final panel, chaired by IU Bloomington PhD student Jessica Storey-Nagy, explored questions of minority identity both in Romania in the interwar period and among Romanian and Roma migrants in contemporary France.

On Saturday afternoon, Dr. Iordachi delivered the keynote address, entitled “Reburials and ‘Regenerative’ Cleansing: Iron Guard’s Festival of the Dead in Romania (1940).” The presentation examined the obsession of the Romanian Iron Guard with the cult of the dead as part of a broader phenomenon within fascist ideology and ritual practice. As Dr. Iordachi explained, after its advent to power in September 1940, the Iron Guard placed pompous and carefully-staged (re)burial ceremonies at the center of its political style in order to bestow legitimacy and sacrality to the would-be fascist elites and the resurrected nation. The Iron Guard used dead bodies to forge its body-politics, and its 130-day rule was a morbid fascist festival of the dead, marked by an extraordinary frenzy of exhumations and reburials. In this presentation, Dr. Iordachi argued that funeral ceremonies served as rites of passage marking not only the deceased’s’ transition from ‘this world’ to the ‘other world,’ but also the political transition to the fascist totalitarian state. They provided the ideological and ritual basis of the new regime, by articulating discourses of divine election, victimhood and martyrdom but also criminal revenge that was to lead to ‘national salvation.’

The robust collaboration and enriching discussions which characterized the conference evince both the enthusiasm and promise of young scholars involved in the fields of Romanian and Hungarian studies. The graduate student organizers, George Andre, Andrew Bartels, Michelle Schulte, Alina Williams, and Leah Valtin-Erwin, are extremely pleased with the lively participation of presenters, panel chairs, and audience members. They would also like to extend their thanks to several institutional supporters: The Russian and East European Institute, The Department of Central Eurasian Studies, The Department of History, The Institute for European Studies, The Inner Asian and Uralic National Resource Center, and the Indiana University Funding Board. For further information about future conferences, please contact romso@indiana.edu.