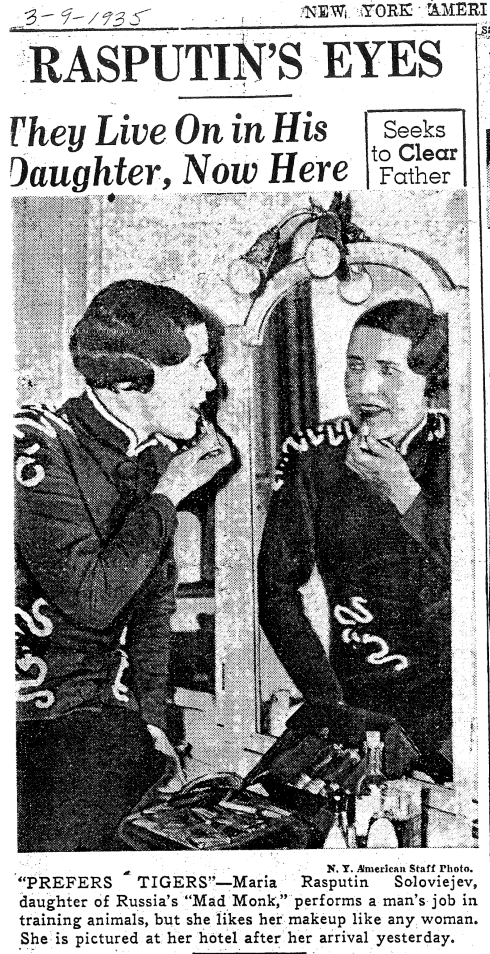 While we may see lion-taming as a gender-neutral profession today, apparently this was not the case in the ‘30s. New York American, March 9, 1935. Clipping courtesy Tim Connor of Peru, IN.

Full of twists and turns, the life of Rasputin’s daughter Maria was almost as dramatic as her father’s— and brought her close to home for Hoosiers. 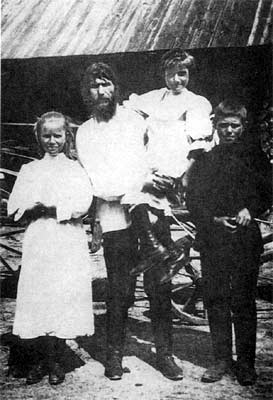 Young Maria Rasputina, standing to her father’s left, along with her siblings. Dmitri Rasputin in dark clothing, and Varvara, the youngest, in her father’s arms. Hrono.ru: http://www.hrono.ru/biograf/bio_r/rasputin_ge.php.

Maria’s life was eventful by any measure, which is probably unsurprising for anyone familiar with early 20th-century Russian history. Born in provincial Pokrovskoye, Siberia, in 1898 (or possibly 1899), she moved with her family to Saint Petersburg in 2010father’s work took the family to St. Petersburg in 1910. She was the middle child of the three Rasputin children that survived to adulthood. She spent her teenage years in and around the Tsar’s court, and even after her father’s heavily-mythologized assassination in 1916, her family remained influential.

Following the Revolution, Maria and her husband, Boris Soloviev, fled Russia by way of Vladivostok, then pinballed through the Middle East, Prague, and Austria, before finally settling in Montmartre, France. Boris worked at odd jobs to support his wife and two daughters, but died of tuberculosis in 1926. Maria found employment as a cabaret dancer before joining a circus, where, in a case of macabre irony, she was compelled to dance a dramatic interpretation of her own father’s death. She continued to perform for various European circuses into the 1930s.

By the 1930s, much of Maria’s remaining family had been put to death in Russia or had otherwise passed away. She harbored a lifelong bitterness and resentment towards the Bolshevik regime and constantly struggled to vindicate her father’s name. Between 1929 and 1977 she wrote and published three separate memoirs in which she lovingly and respectfully depicted him as a good, if misunderstood, man. The last of these, Rasputin: The Man Behind the Myth (Prentice-Hall), was reviewed for the Slavic Review in 1978 by none other than IU Emeritus Professor of History David Ransel, who went on to direct REEI from 1993 to 2009.

In 1935, Maria Rasputina came to America to work as a wild animal tamer for the Hagenbeck-Wallace Circus, whose size and grandeur approached that of the more famous Ringling Brothers and Barnum & Bailey. Speaking little English and relying instead on German, she arrived by steamer in New York and soon joined Hagenbeck-Wallace at its winter quarters in Peru, 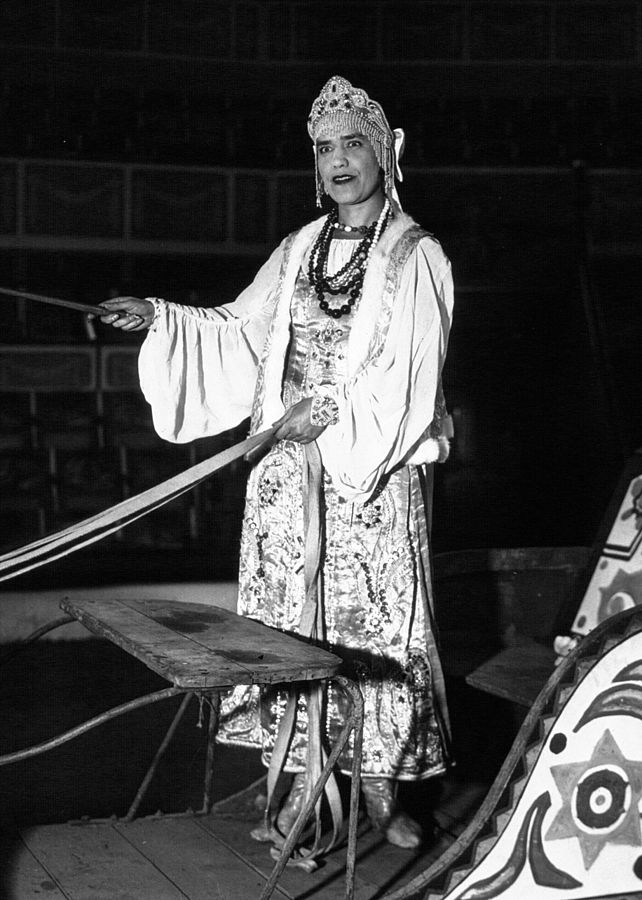 Indiana, about an hour’s drive north of Indianapolis. Under the supervision of two instructors, she set about her work, training large, carnivorous beasts, apparently quite fearlessly. In her own words: “You wave your arm swiftly, like this, and you say, ‘Sweetheart, hup!’” As she later told a reporter at the Chicago Herald, “I am more afraid of people than tigers. A tiger charges you from the front, but your enemy comes at you from behind.”

While sharing the arena with two lions, two tigers, three bears, two leopards, and two pumas (that’s all?), Maria lost her footing and was mauled by one of the bears (a Himalayan black bear). Her colleagues managed to fend off the animals and rescue her. For a number of weeks Maria recuperated at Peru’s Dukes Hospital, where doctors stitched up her leg and arm. But the indefatigable Maria rejoined the circus for its summer tour in Chicago, travelling thereto by ambulance. According to an account in the Peru Republican, the news of Maria’s “encounter with the bear spread widely” and “ when it was announced that she would appear in person in the Grand Entry, the Stadium [Chicago Stadium] was packed to the roof with people who gave her an ovation as she waved to them from her bed upon a beautifully decorated wagon.” 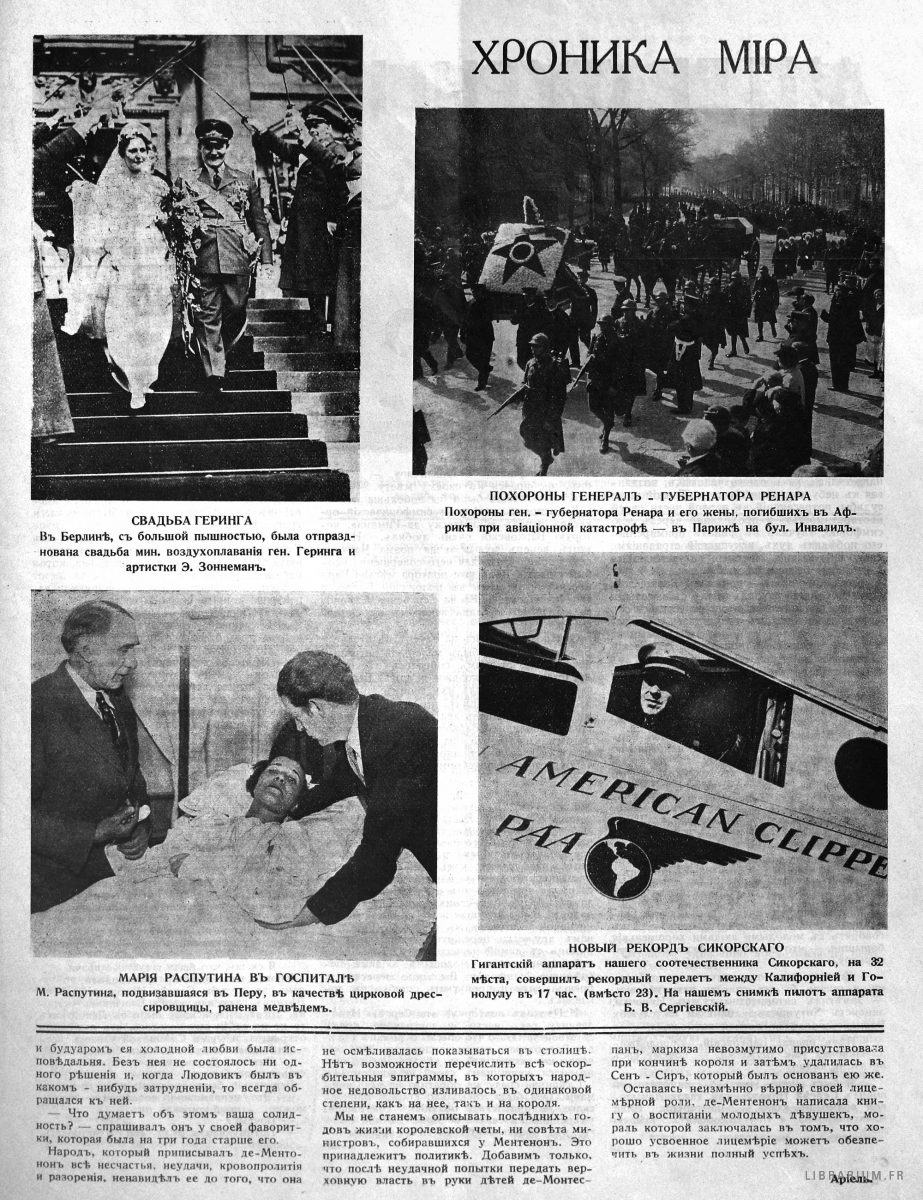 A Russian-language emigrant newspaper, published in France, reports on Rasputina’s injury, bottom-left. Above it is a photo of the wedding of German General Herman Goering. May 1935: http://librarium.fr/ru/newspapers/russiaillustrated/1935/05/19/5.

Maria soon retired from the circus and later found work as a riveter in a California shipyard during World War II and continued to work in defense plant for a number of years thereafter. Until her death in 1977, she resided in the Los Angeles area, supplementing her Social Security payments with income from giving Russian lessons and babysitting. Her two dogs bore the whimsically macabre names of Yussou and Pov, evoking the memory of the principal conspirator in her father’s murder, Prince Felix Yusupov. Maria outlived a daughter of the same name—the wife of a Dutch diplomat, according to one source, she befriended Yusupovs’ daughter Irina—while her other daughter lived until 2009.

In 2006, Robert Alexander published a fictionalized account of Maria Rasputina’s life under the title Rasputin’s Daughter (Penguin Books). Today, the site of the Hagenbeck-Wallace Circus winter quarters houses the International Circus Hall of Fame, which encompasses two barns and trove of memorabilia, while the descendants of Maria Rasputin live near Paris.

Maria Rasputina’s wild ride of a life shows us that the forces of history work in mysterious ways. That a girl who grew up playing with the children of the Tsars should end up underneath a bear in small-town Indiana, spurred by revolution and political convulsions far beyond her control, is ironic, bizarre, even Kafkaesque. But, her story is a fascinating tidbit of Indiana history and one of many that connect the Hoosier state with Russia and Eastern Europe.